Apart from research and design projects, we are conducting so-called studios on the planning and design of sustainable energy landscapes at Wageningen University and the Amsterdam Academy of Architecture. These studios are dedicated particular questions and last between two and six months. Over the past years, we also tutored more than 50 MSc and BSc thesis projects on energy landscapes. A number of outstanding student projects are briefly described below to inspire other students.

Please note: WUR students who are interested to conduct a BSc/MSc thesis on Energy Landscapes please contact Sven Stremke. The thesis reports can be accessed via the WUR library site.

Lecture series ‘energy landscapes’ at Amsterdam Academy of Architecture (2020)
In Spring 2020, the High Density Energy Landscapes Research Group at the Amsterdam Academy of Architecture hosted a lectures series on energy landscapes. Each evening two speakers were invited, one from the academia and one from the design community. The first lecturer brought ‘facts’ and ‘theory’ to the students, the second translated this knowledge in real-world design projects. Invited speakers were Elizabeth Monoian and Robert Ferry (both LAGI: Land Art Generator Initiaive), Dan van der Horst (University of Edinburgh), Klaas Jan Wardenaar (SmartLAND), Dirk Sijmons (H+N+S), Dirk Oudes, Hester Koelman and Lieke de Jong (all Amsterdam Academy of Architecture), Alessandra Scognamiglio (ENEA, Italy) and Ingrid Luijkx (Wageningen University). This ‘energy landscape’ lecture series was a part of the ‘Theory, Society and Design’ course (C4/C6) curated jointly by the three research groups of the Academy.

Designing with Energy: Lecture series at Amsterdam Academy of Architecture (2017)
There is mounting evidence that the assimilation, conversion, storage, and transport of renewable energy will give rise to the most pivotal land use changes of the twenty-first century. Landscape architects, architects, urban planner and other environmental designers play a critical role in this socio-technical transition that affect both the built and natural environment. This lecture series covered fundamental design concepts, explorative design proposals as well as experiences from practice – all of which can inform design-inquiry towards a low carbon future. The notion of energy transition was explored from a spatial perspective while critically discussing policies, governance and the (potential) role of environmental designers. This dedicated lecture series was hosted by the Amsterdam Academy of Architecture between 8th of February and 22nd of March 2017 as part of the C4/C6 course on theory, society and design. List of speakers: Sven Stremke (WUR, NRGlab, AMS institute); Dirk Sijmons (TU Delft, H+N+S); Andy van den Dobbelsteen (TU Delft, AMS institute); Boris Hocks (POSAD, Den Haag); Sören Schöbel (TU Munich, Germany); Jannemarie de Jonge (Wing, Wageningen); Elizabeth Monoian & Robert Ferry (Land Art Generator Initiative, Pittsburgh, USA). 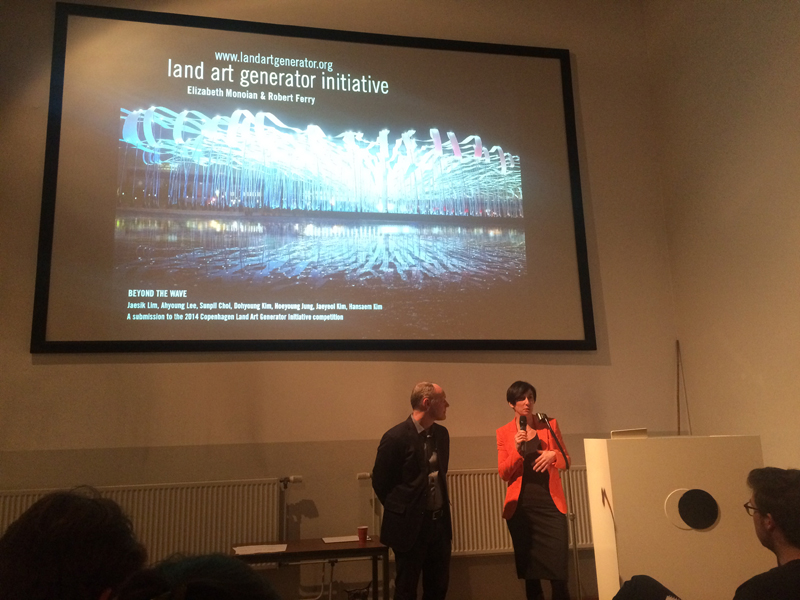 Figure: Elizabeth Monoian and Robert Ferry from LAGI presenting at the Amsterdam Academy of Architecture.

Designing for climate action in the North Sea: Master thesis Changsoon Choi (2016)
Currently, adaptation and mitigation are considered two different means to address climate change and, consequently, dealt with separately in policy and practice. In this MSc thesis, an alternative strategy has been explored: a synergetic approach to integrated climate actions. In order to safeguard the Dutch coast from sea-level rise, and to provide renewable electricity, a set of islands has been proposed: the Blue Heart. The design combines climate adaptation and mitigation while carefully considering marine ecology. Being located 20 kilometers off the coast, the main island accommodates a wide range of functions including aquaculture, algae farming, and leisure opportunities, while serving as a stepping-stone in the offshore ecological network. A set of submerged breakwater structures can help to prevent coastal erosion of the main island. The realization of this design proposal can become cost-efficient by making use of decommissioned oil/gas platforms in the North Sea. This way, the artifacts of the offshore fossil fuel energy seascape become the catalyst for an alternative and more sustainable low-carbon future.

Recycling energy landscapes in Groningen: Master thesis Vincent Peters (2016)
Since the discovery of large gas fields in 1950’s, the Netherlands are highly dependent on natural gas as energy source. Because of problems connected to the extraction and the use of natural gas (e.g. earthquakes, soil subsidence and climate change), a transition towards renewable energy sources is needed. Often, such transitions result in disrupted and abandoned landscapes. In order to explore alternative futures for the North of the Netherlands, the notion of ‘recycling energy landscapes’ was examined in this Master thesis project. To understand the life cycle and perception of landscapes dominated by natural gas extraction, a content analysis of Dutch newspapers was conducted as part of the research. At a regional design scale, each of the three existing landscape types gives rise to a number of unique propositions. At the local design scale – an extraction site – regenerative and cultural historic principles were applied. This project reveals how selected artefacts as well as materials of the natural gas landscape can be recycled both in a physical and cultural historical way.

Shaping solar energy for Zeeburgereiland: Master thesis Tom van Heeswijk (2016)
Local oppositions to wind turbines and solar parks are often related to visual impact and hampers renewable energy developments. In his Master thesis, Tom van Heeswijk examined which factors influence the perception of renewable energy in general and the perception of four Dutch solar energy projects in particular. Two solar parks and two freestanding solar installations were studied by means of empirical research. Statistical analyses revealed a number of response patterns with regard to the perception of these technologies. The findings were then used to inform a number of energy-conscious design principles for solar energy in the public domain. This way public preference can be accounted for. The principles were tested on the Zeeburgereiland in Amsterdam, a new neighbourhood that ought to be energy neutral. The project shows that renewable energy can be designed as inherent part of the urban fabric while improving aesthetic values.

Farming the Sun: Master thesis Fan Yang (2014)
In the era of renewable energy, the involvement of the landscape architect is needed in order to achieve a sustainable transformation of the environment. Research through design has the capacity to reveal how to fit new technologies into the landscapes. Photovoltaic panels (PV) is one of these new technologies. PV is a booming industry with an average yearly growth of 14% worldwide. Due to its contribution to renewable energy supply and mitigation of climate change, the province of North-Brabant is willing to support the development of solar parks. The color, material and the shape of solar panels, however, complicate the integration in the surrounding landscapes. Moreover, their occupation of large pieces of land may cause conflicts with other land uses. That is why the following questions were studied in this thesis project: Where are the suitable locations for solar parks in the province, and how to integrate solar parks in a selection of regional landscape?

Figure: Winter impression of the proposal for the Reutsche Loop solar park (F.Yang, 2014).

Infrastructure Energy Pulse: Master thesis Roxana Florescu & Lucia Pro (2013)
The issue of energy transition is commonly considered a problem to be faced in a quick and efficient manner. In their thesis, Roxana and Lucia took the challenge to reverse this position, investigating renewable energy sources and associated technologies as solutions for a bright future. The focus of their thesis was on how renewable energy can become a cornerstone of a complex transformation strategy for the development of sensitive landscape, embracing economy, society and nature. Conducting research and design at the regional, urban and site scale, they illustrate how it is possible (and recommendable) to utilize the hidden potential of renewable energy transition for (re)vitalising and (re)identifying landscapes in an old mining region that connects Belgium, the Netherlands and Germany. Infrastructure Energy Pulse represents one of the key projects of the KWh/m2 studio (TU Delft and Wageningen UR) where environmental design students and scholars explored energy transition in the larger built environment.

Energy and landscape experience: Master thesis Stijn Tijhuis (2013)
In his Master thesis Stijn explored the use of narrative inquiry and energy engaging design concepts for the shaping of sustainable energy landscapes. He studied how to enrich the meaning of energy landscapes by designing specific landscape experiences. The municipality of Zwijndrecht presented the site for this research and design project. Two alternative design proposals were developed and discussed with stakeholders to evaluate the usefulness of designing landscape experiences based upon (a) people’s narratives and (b) energy engaging design concepts. Based upon a stakeholder workshop and a number of interviews, a place specific and attractive energy landscape has be designed for the municipality of Zwijndrecht.

Dissipative City Rotterdam: Master thesis Darius Reznek (2012)
In Dissipative City, Darius studied how exergetic optimization of energy and matter cycles can create an attractive urban structure that can provide ecosystem services and support human life. He does this on building block and district scale. For the latter, he designed the ‘urban incubator’, reinventing Buckminster Fuller’s dome with energy transition in mind. Both the membrane and the urban incubator can help the city of Rotterdam to cope with of future energy depletion, climate change and population increase.

A Sustainable Landscape for Arnhem: Master thesis Taícia Marques and Jaime Gomez de la Fuente (2012)
Taícia and Jaime studied how the city of Arnhem (NL) could become CO2 neutral. In their “Less is Better” and “Business as Usual” visions, they explored how Arnhem will look like when energy transition is considered, and how energy-conscious interventions will contribute to CO2 neutrality in the city. The four most important principles are (1) Reducing the consumption of energy by saving, (2) Focusing on measns to store and exchange energy, (3) Generating the most energy by renewable sources, (4) Using high-exergy sources for high-grade processes. By means of robustness analysis, Taícia and Jaime formulated recommendations for the municipality to start their way to CO2 neutrality.

Hidden Power Veenkoloniën 3.0: Master thesis Tim Snippert (2011)
In his final MSc thesis, Tim searched the hidden potentials of the Veenkoloniën to become an energy, water and food independent region again. By applying a system approach, he reveals how the Veenkoloniën could be transformed into a source of renewable energy and various products. His proposal is based on the thorough analysis of energy potentials, physical landscape, water system, regional identity, social situation, real estate development and the potential for establishing a biobased economy. This thesis was submitted to the Eo Wijers regional design competition, where Tim won one of two young talent awards.

Sustainable Energy Islands: Master Studio 2011
In 2011, the municipalities of Schouwen-Duiveland and Goeree-Overflakkee (two islands in the provinces of South Holland and Zeeland) commissioned students of Landscape Architecture, Planning and Cultural Geography to develop ideas for sustainable energy islands. Goeree-Overflakkee was supported in this by the ‘Mooi Nederland’ program of the Ministry of Infrastructure and the Environment. From March to June 2011, 60 students worked both in teams and individually on developing visions for self-sufficient, sustainable energy futures for the islands, while taking into account both landscape quality and its perception and valuation by the islands’ inhabitants and visitors. They conducted research on a wide range of aspects related to the assignment, made plans for an energy transition and designed sustainable energy landscapes.

Figure: In the ‘Beyond Fossils’ book, we present all group projects and a selection of individual students projects from the 2011 Studio. Download PDF here.