The city region of Parkstad Limburg in the South of The Netherlands commissioned this project in order to instigate the transformation from a region relying almost entirely on fossil fuels to renewable energy sources. The PArkstad Limburg Energy Transition (PALET) project integrates two research tracks: the analysis of potentials for energy savings performed by NEBER/Zuyd Hogeschool and the analysis of potentials for renewable energy generation performed by the NRGlab/Wageningen University. The office of H+N+S Landscape Architects facilitated the integration of the research and the dissemination of the results.

The research has been performed following the methodological framework of the five-step approach for strategic spatial planning and landscape design. The energy potential mapping resulted in an overview of potentials and constraints for five renewable energy sources. Next, a questionnaire was employed to gather and prioritize key consideration of local stakeholders with regard to the future energy landscape. A multi-criteria decision analysis (MCDA) was used to create two scenarios. The reference scenario reveals the maximum capacity for renewable energy generation. The integrated scenario reveals the potentials for renewable energy generation, taking a set of conditions into consideration. These conditions were derived from the conceptual framework for the planning and design of sustainable energy landscapes and further specified by means of a questionnaire and interviews.

The research provided Parkstad Limburg with insights about the realistic energy potentials in the region. Next, the study revealed which conditions the local and regional administration control and how their decisions would affect the emerging energy landscape. While our study informed the political debate about realistic energy targets for the region, the results are not static. Instead, a set of interrelated tools has been developed that can be used to test and verify alternative proposals for a sustainable energy landscape in future phases of the transition process.

Our research, together with the potential for energy savings, lead to the formulation of a regional ambition with regard to energy transition: Parkstad Limburg aims to become energy-neutral by the year 2040. A summary of the process and the ambition can be downloaded here (in Dutch only). 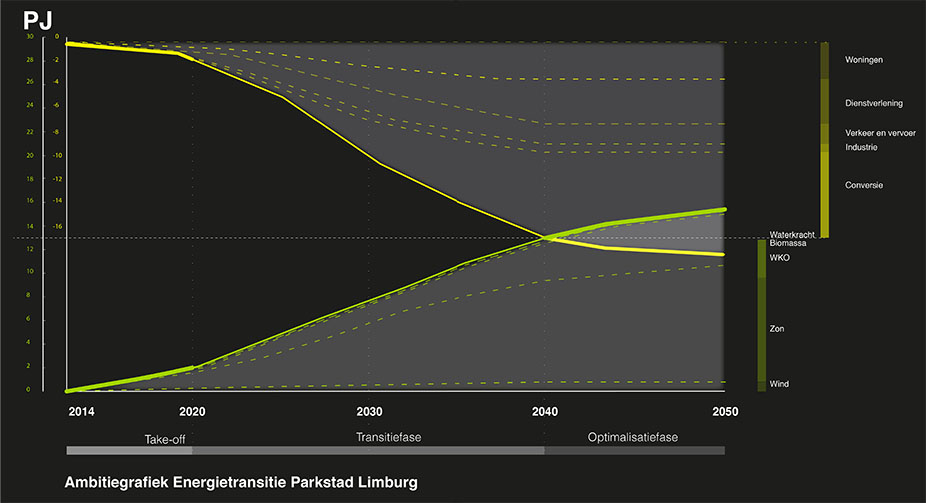