Often, we are approached to support real-world energy transition processes. While we remain pleasantly surprised by the large demand for such studies and by the level of commitment from communities and investors, there remain many challenges for the planners and designers. That is why we understand each assignment as a new experiment that we engage by means of evidence-based design. Therefore, each design project also involves substantial research efforts. In the absence of generally applicable approaches and generic solutions, we rely on intensive collaboration with planners, engineers, artists and others committed to sustainable energy transition.

Energietuinen NL / Energy Gardens NL (2019-2023)
The Dutch Natuur en Milieufederaties (NMF) asked the NRGlab/Wageningen University to join their project team in the development (design and construction) of three ‘Energy Gardens’ in The Netherlands. The project is funded by the Nationale Postcode Loterij. With this project NMF wants to combine large scale renewable energy generation with recreational, nature, and educational functions. A second aim is to show that this can be done in such a way that it adds to the spatial quality of the existing landscape. In the project, the NRGLab is responsible for the designs that will be created in co-production with local stakeholders. The project runs until 2023 – deliverables are two or three constructed ‘Energy Gardens’ and a guide/handbook on how to create ‘Energy Gardens’. The NRGlab contact person is Merel Enserink. More information can be found here.

National Perspective Energy and Space (2016-2017)
Four design companies, Deltametropool and the NRGlab/Wageningen University collaborated in a project that aims to inform the Dutch discourse on sustainable energy transition, from a spatial perspective. The project addressed the energy use of the entire Netherlands: heat (and cold), electricity and transport fuels. The consortium examined realistic potentials to reduce energy consumption and possible strategies to utilize wind, solar, biomass and geothermal energy as well as heat-cold storage. On the basis of this design research, a number of critical measures and spatial possibilities with regards to the Dutch energy landscape have be synthesized, in line with the COP21/Paris agreement, quantitative as well as qualitative considerations. Results, in the form of a book, can be accessed here (book in Dutch as PDF). Commissioner: Ministry of Infrastructure and Environment Partners: HNS, POSAD, FABRIC, Studio Marco Vermeulen and Vereniging Deltametropool

DEESD: Sustainable energy landscapes and ecosystem services (2013-2014)
After acceptance of our research proposal on the integration of renewable energy provision with other ecosystem services by the KBIV committee, the DEESD project has been launched in Spring 2013. DEESD is a joint project between the NRGlab, Alterra (S.Verzandvoort, K.Hendriks, A.Smit) and other partners from knowledge institutes, governmental bodies and the private sector. The DEESD project enables us to investigate the ecosystem services dimension of sustainable energy landscapes with a case-study on the Dutch island of Schouwen-Duiveland. The Five-Step Approach (Stremke et al. 2012) is used to structure the research and design process that has commenced with the analysis of landscapes, present-day energy system, energy potentials/constraints and a selection of ecosystem services.

DTB: Sustainable Transportcorridor Betuwe (2013-2014)
The Province of Gelderland has initiated the Sustainble Transportcorridor Betuwe project (in Dutch DTB) to investigate the potentials for energy savings and renewable energy provision in the Betuwe region. See also previous post on the DTB project. The DTB project addresses a unique challenge by combining energy transition and sustainable transport. Many stakeholders in the area are looking for solutions to save energy and generate renewable energy. The dense infrastructure in the region, transected by several highways, train lines, rivers and canals, offers particular chances. DTB aims for an encompassing strategy supported by local stakeholders, supporting their sustainable ambitions. Read more

Figure: Analysis of the energy consumption for road transport and mobility in the Betuwe region

Regional energy vision Northwest Overijssel (2011)
On account of the European and Dutch 2020 targets for renewable energy, we were asked in 2011 to create a vision for energy transition in the northwest of Overijssel. The project was commissioned by waste processing firm ROVA, the province of Overijssel and the four municipalities of Dalfsen, Staphorst, Steenwijkerland and Zwartewaterland. In close collaboration with the engineers from Oranjewoud, a report containing regional energy potentials, outcomes of a survey, energy demand/supply calculations, a map representing our energy vision and several impressions of the future energy landscape was delivered.

Energy visions Veenkoloniën (2010-2011)
Within the ‘Hotspot Veenkoloniën’ project, a number of interdisciplinary teams studied how this region can play a role in carbon sequestration to counter negative effects of climate change. Our part of the research, led by the TU Delft, existed of a network analysis, energy potential mapping and a set of regional energy visions that were presented and discussed in public meetings. This project was commissioned by the ‘Aganda voor de Veenkoloniën’.

Hoogezand-Sappemeer: Groene Compagnie (2009)
The province of Groningen and the municipality of Hoogezand-Sappemeer commissioned this project on alternative energy resources in the North of the Netherlands. The study, conducted with our colleagues from TU Delft, resulted in a set of options for an energy-neutral neighbourhood: the ‘Groene Compagnie’. Our energy potential studies revealed that the combination of solar, wind, waste, biomass and geothermal energy can exceed the expected energy consumption of this new part of the town Hoogezand-Sappemeer. 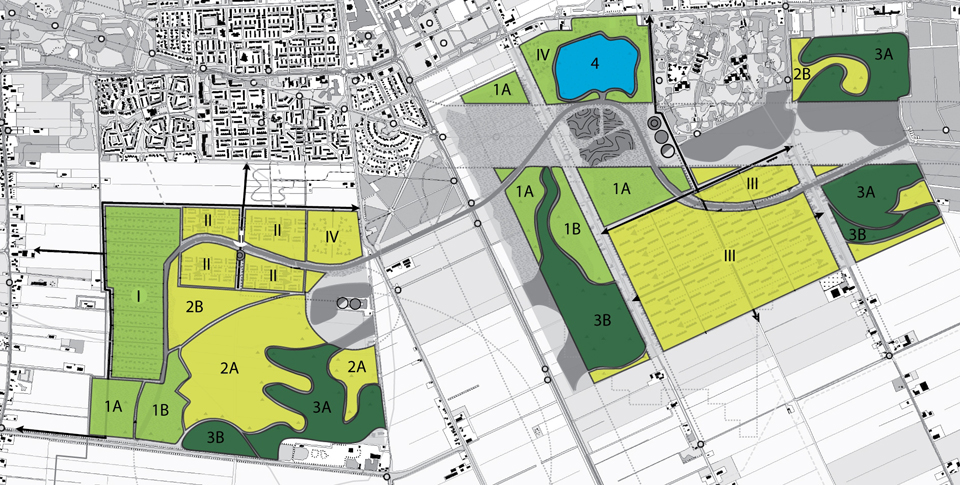 Figure: One option to develop the new neighbourhood in line with energy-conscious design principles