Posted by Sven on January 8, 2019 in Homepage, Project

The implementation of the Paris Climate Agreement (COP 21) presents one of the greatest challenges for the planning, design and management of the environment. That is why, in the Netherlands, spatial experts have been asked to participate in the negotiations of the National Climate Agreement (in Dutch Klimaatakkoord). The negotiations took place between April and December 2018, on five so-called sector tables: Electricity, industry, mobility, built environment and agriculture/land use.

Sven Stremke and Dirk Oudes were part of a consortium of spatial researchers (complete list below) that participated in the meetings for the National Climate Agreement and advised negotiators on questions with potential relevance for urban and rural landscapes. Together, we managed to put landscape quality on the agenda (in Dutch ruimtelijke kwaliteit) and raise awareness for the concept of energy landscape: observable landscapes that originate directly from the human development of energy resources (Pasqualetti & Stremke, 2018). The physical consequences of implementing energy transition in The Netherlands and beyond may vary from small-scale local interventions to larger and more dedicated, so-called entity energy landscapes.

The preliminary results – the Concept Climate Agreement – can be accessed here (in Dutch only). Our contribution to the Agreement builds upon earlier research on energy transition at the scale of The Netherlands published in Ruimtelijke Verkenning Energie en Klimaat and Energie & Ruimte: Een Nationaal Perspectief and provides the foundations for a continued involvement of spatial experts in the Dutch energy transition. 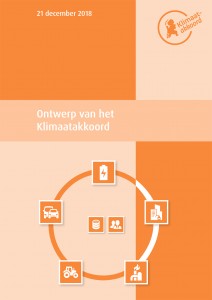