Last week Sven, Paolo and Dirk participated in a two-day atelier for the Duurzame Transportcorridor Betuwe project (Sustainable Transportcorridor Betuwe). From January 2013 till April 2014, the NRGlab was part of the kernteam of the DTB project and performed research on the energy landscape of the Betuwe region that consists of three mayor corridors, the A15 (highway), the Betuweroute (railroad) and the Waal (river).

The DTB Atelier consisted of four groups, each performing on four different scale levels: (1) the small scale which was mainly formed by local stakeholders; (2) the scale of the three transport axis; (3) the scale of the infrastructure nodes, and (4) the international scale. The goal of the DTB Atelier was to generate spatial perspectives for a sustainable, flourishing and recognizable Betuwe corridor. The international team argued that the DTB area itself consists of several niches (such as agro-logistics) within the context of the international corridor. As an intervention, we proposed to build upon existing and near-future developments between Arnhem and Nijmegen. A central element such as a hub connects different flows of goods on several modalities. 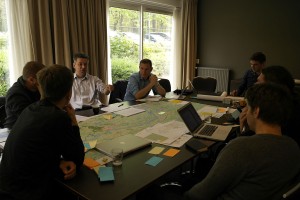